I was first interviewed on Radio Corca Bascinn in 2014 when I had just started out on my journey to find out more about my Irish Roots and at a time when my father Jim Prendergast was gravely ill and losing his battle with Parkinson’s disease.

In February this year Lorna Moloney emailed me and invited me to be interviewed by phone on her genealogy Radio show.

At the time I was driving along the East Coast of Australia to follow the Prendergast trail. Internet connection was at times unreliable and we had no landline so the interview was postponed until a later date.

The second time Lorna invited me to be interviewed live to air by phone was during the time just after Cyclone Debbie when we had no electrical supply so again the interview was postponed. Friday 14 April was the date set for the interview.

The host of the genealogy radio show, Lorna Moloney telephoned me on Thursday evening to ensure that the telephone connection was working and that I was prepared for the interview. We enjoyed a very joyful chat.

Lorna emailed the Programme running order: Raidio Corca Baiscinn which outlined minute to minute what was to take place on the show.

Lorna wanted to hear about the origins of the Prendergast name dating back to the lost medieval village called Brontegeest in the province of Flanders, near to the city of Ghent and was taken by early Flemish settlers to Normandy and brought to England by Prenliregast, a  follower of Duke William of Normandy during the famous Normandy conquests in 1066. 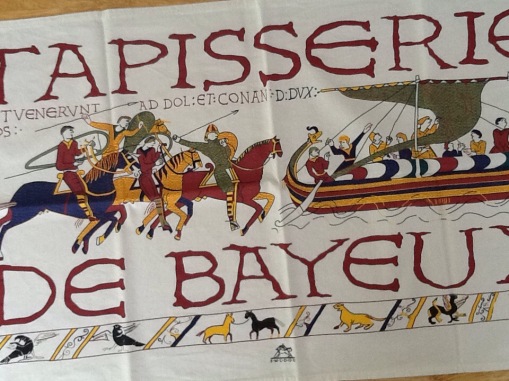 Prenliregast’s son Philip was given lands at Haverfordwest in Pembrokeshire Wales.

His son Maurice de Prendergast accompanied Strongbow, Earl of Pembroke to Ireland in May 1169.

By defending the king Diermot McMurragh in his battles, the Prendergasts were awarded land, a Baronetcy and later grants as the viscounts Gort of Castle Gort Galway. Throughout Ireland there are reputed to be 15 Castle with Prendergast connections.

One of these Castles is Enniscothy Castle built in 1201 in county Wexford by my Ancestor Sir Philip de Prendergast.

This is the Castle where I will host the High Tea on May 30th, 2017 to say Thank you to the kind people of Wexford for inviting me to be guest of honour at a Welcome Home ceremony held there in my honour in 2015.

Lorna was able to fill me in and other listeners on the various Close Rolls dating back as far as 1232 and 1284 and later Calendar of State Papers from 1588-1592.The Close Roll dating 1232 is written in Latin so it will make for interesting reading once it is translated. These all make reference to the Prendergasts.

During the show Lorna Moloney referred to Rena Lohan who is the Senior Archivist at the National Archives in Dublin. In Rena’s notes she discusses the use of transportation as a penal measure.

This topic led to the introduction of my 5x Grandfather John Prendergast being transported to Australia for his involvement in the 1798 Rebellion. Not only was Lorna interested in discussing the arrival of John Prendergast on 11/1/1800 Lorna was interested in hearing the developments that I have made and the information I have researched regarding John and Catherine Prendergast’s early settlement of the Hawkesbury, their son John Jnr’s development of the Campbelltown area and his grandson’s development of the Monaro areas and the contribution they made by way of donating money to help build St. Mary’s RC Cathedral in Sydney, the Campbelltown RC Church and the building of the Cemetery at Moobah by William Prendergast.

We enjoyed a half hour of interesting discussion and Lorna offered to put my quest to find Prendergast family in Tipperary, Mayo Dublin and Wexford on the Genealogy website blog.

The time flew and I enjoyed being interviewed by Lorna.

If you would like to hear my interview the link is –

Back to top of page