John Prendergast, my 5x Grandfather died intestate in 1833. In Windsor, Australia, shortly before his death, he distributed all of his possessions to his children. Why did he die without leaving a Will? Was it to save his family the expense of paying death taxes? Was it so that he could distribute his property in the way that he was assured that each beneficiary would receive what he wanted them to inherit? Or, as a United Irishman who was transported to Australia for his involvement in the 1798 Rebellion, had he memorialized a Will in Ireland prior to being arrested in 1799.  Was he afraid the authorities would tie his Australian Will to his Irish Will had he left one in Australia?

It is known that Catherine Prendergast vanished from the Australian records in 1801 shortly after the birth of her son John who was born in the colony of New South Wales.

On my 2015 visit to Ireland I discussed this dilemma with Lyn Brady of Glasnevin cemetery. Lyn checked her data base and discovered the grave of a Catherine Prendergast K64 whose address in life was Francis Street, Dublin. This is the the Parish of St. Nicholas of Myra where John Prendergast and his ancestors were baptised.

So, today armed with a transcribed Will of J. Prendergast and a Will of Catherine Prendergast discovered on the wonderful site “Find my Past” I set off for the National Archives of Dublin to find out what the content of each of these Wills is.

I had forgotten to bring my Readers Card with me from Australia so the first thing I needed to do was apply for a new one. After I had placed my possessions in a locker on the ground floor taking only my note pad, black lead pencil, Computer glasses and two forms of Identification, I was able to go to the 5th floor where upon filling in a new application, a replacement Readers card was issued.

I enquired at the Reception desk about viewing the two transcribed probated Wills. I needed to visit the Archivist on duty to obtain the reference numbers of the microfilm.

Today the Archivits on duty was Maire Mac Conghail. I was delighted to meet Maire who is the President of the “Accredited Genealogist of Ireland” who retrieved the book “Penders Census”written by an ancestor of mine, Seamus Pender. Maire also found a Bourke’s Peerage listing for Thomas Prendergast, Viscount Gort who prevented the attempted murder by the Jacobites of William of Orange in 1696. Thomas is a descendant of Maurice de Prendergast as am I.

The next important discovery I made was when Maire, using the irishgenealogy site advised me that one of the sponsors for my 5x Grandfather, John Prendergast’s Baptism was Carol Mally, the Carol being Latin for Charles. The other sponsor was Maria Durrell and Maria is Latin for Mary. Ellenora, John’s mother could also be called Hellen, Nora or even Honora. I will need to use this site to check further for more information. Thank you Maire, you are a great help.

Regarding the two Wills. These will need to be investigated further as some interesting information has come to light but sadly these two Wills do not connect John Prendergast to our Catherine Prendergast. 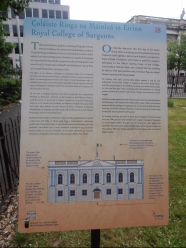 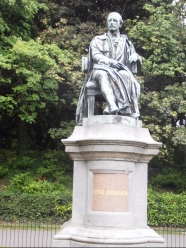 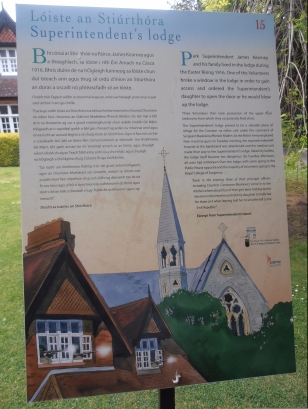 This afternoon I took a wander along Dawson Street in the hope that I could pin point a property mentioned in the Deed of Francis Prendergast, I had read that there were Stables and outhouses on the property. I enquired at a shop but was told that there were no longer any stables in Dawson Street as shops had long replaced these large and valuable properties but that I might like to visit the little Museum of Dublin just around the corner from Dawson Street.

When I stepped into the Little Museum of Dublin, a really helpful attendant by the name of June took an interest in my story. When I mentioned the Prendergast property and stables, she said “Come with me”. June took me to a room with a window overlooking a building site and low and behold, the Stables were clearly in view. She did explain that shops blocked them on Dawson Street so this was the only way I could see them. I took some photos, thanked her and set off.

Undeterred I decided to walk along Dawson Street to see what shops were in front of the stables when low and behold, there was a side gate opened because a workman was walking in. I followed him in and asked his permission explaining the purpose of my visit. ”We might be related”, he said.

A young couple was standing near the closed doors of what might have been the Stables so I asked if they knew anything about them. They confirmed that they had been stables in the  late 1700s. When I remarked that a Prendergast family had lived on this property, that I was a Prendergast descendant and that I planned to visit the Registry of Deeds tomorrow and get a copy of the memoralized Deed dated 1804 the young man looked as though he had seen a ghost!. I had seen the index and content to this Deed at the Registry of Deeds in 2015 on my last visit but had not had the chance to obtain a copy. Tomorrow I will do so. Just another example of bringing family history to life.