Fellow genealogists refer to the National Archives at Kew in England as one of THE most important repositories in the world. 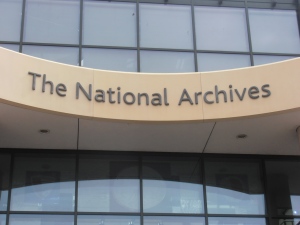 I have long wanted to visit the National Archives as they hold a large collection with relevance to most Australians. My Prendergast family included.

Today the weather was cool but fine, which was fortunate as I was on foot and had planned to take public transport to Kew.

I walked a short 6 minutes from the Radisson Blu Hotel to Gloucester Street Railway.

There, I bought a Rail day pass as it worked out cheaper than the Oyster card. The trains run frequently so there was no problem getting to Kew although one change was necessary along the way.

The street route from the Railway Station at Kew to the National Archives was straight forward and clearly marked. It was just .6 of a kilometer away from the Station.

When I arrived at the National Archives and navigated my way through the revolving door, a security guard was on duty to check my ”Briefcase on wheels”. I was then advised to store my belongings in a locker as I could only take a few items into the research area with me.

I was allowed to take my camera if I used no flash, my Computer if I did not store any loose leaf paper in it. I needed to bring my Drivers licence  and Passport for ID if I wanted to get a Readers card. These items I could have with me inside the Archives.

A kind old man who was collecting his belongings from the Locker down stairs stopped what he was doing to show me how to use the security lock on the Locker I had chosen and then took me up to the next floor and to the reception area of the Repository to introduce me to the Archives Staff and the Morman Ladies. They were all very helpful.

As I wished to view primary documents I needed to get a readers card. Although I was standing in front of the person who issued the card, I still had to order it on line. This process took some time as to acquire a readers card, a 5 minute video describing all the preservation  techniques and how to handle the document had to be viewed. I had to agree to these terms and conditions before being granted my Document readers card.

It was exciting finding and ordering primary documents. This was all done on line and a seat number in the Readers room was advised once my readers card was scanned. My seat number was 20G.

I was advised that there would be a wait of 45 minutes before I could view my primary documents so I partook of some lunch. A good old English standard of Bangers and mash at the Canteen. A princely sum of just 6 pounds – a tad different to yesterday’s Fish and chip tariff at Harrods of 27 pounds!

After lunch I went up to the research room and the attendant advised me that if I wanted to view the progress of my order, I could view it on line. Within a few minutes my order was ready to view. I had waited just 45 minutes for them.

Before going into the Document readers room which was on the first floor, the map readers room and large items readers room is on the second floor, I had to go through security again.

I firstly had to swipe my Readers Card and then lay all the items that I wanted to take with me into the Document readers room on the table in front of the Security guard.

I was allowed to take my lap top provided I had no loose leaf pages enclosed. I could take a pencil but mine had an eraser on the top so the guard disallowed this item. I had to place the disallowed items in another locker on this floor. Returning to the security desk, the guard then offered me two black lead pencils to borrow instead.

I could take my Camera providing the flash was switched off and I left the cover behind. I could take a binder not pad but no spare sheets. I could not take an eraser inside.

After walking through the sliding double doors and finding Table 20 then it was only a matter of finding my seat – G before commencing to view the original documents of a distant Prendergast relative Viscount Gort. Here is a little of what Wikipedia has to say about him.

From Wikipedia, the free encyclopedia

Field Marshal John Standish Surtees Prendergast Vereker, 6th Viscount Gort VC, GCB, CBE, DSO & Two Bars, MVO, MC (10 July 1886 – 31 March 1946) was a senior British Army officer. As a young officer during the First World War he was decorated with the Victoria Cross for his actions during the Battle of the Canal du Nord. During the 1930s he served as Chief of the Imperial General Staff (the professional head of the British Army). He is most famous for commanding the British Expeditionary Force sent to France in the first year of the Second World War, which was evacuated from Dunkirk. Gort later served as Governor of Gibraltar and Malta, and High Commissioner for Palestine and Transjordan.

When I had finished reading and photographing the documents, I returned them to the reception desk of the documents reading room before once again swiping my readers card and having my possessions checked out at the security desk.

I returned to London by train, taking  a slightly different line – the Piccadilly line- and arrived back to my hotel at 6pm

All in all, I had a wonderful visit to the National Archives Kew. It was a very productive day.