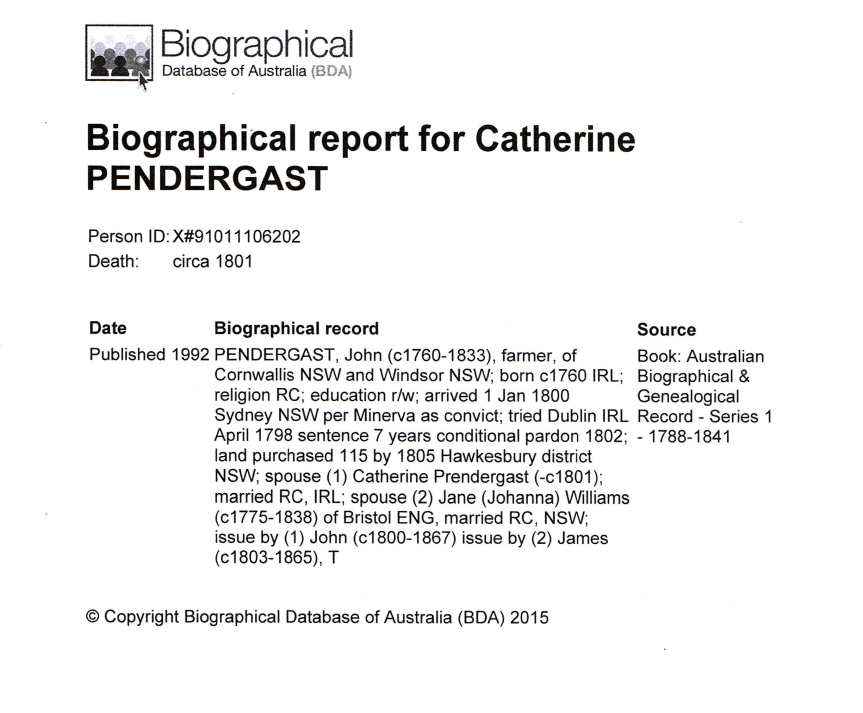 The quest to find Catherine Prendergast has become an obsession of mine. Catherine is my 5x Grandmother and deserves to have her rightful place in our family recognised.

In the Biographical Database of Australia, Catherine has been identified as Person ID: X#91011106202. spouse (1) Catherine Prendergast (-c1801); married RC, IRL issue by (1) John (c1800-1867) we know to be John Prendergast Jnr born in the colony of New South Wales in 1800 shortly after the arrival of his parents John and Catherine Prendergast.

John Prendergast Jnr. went on to become a very wealthy land owner and respected community philanthropist in both the Campbelltown and Monaro districts. He married firstly Elizabeth Dwyer and following her untimely death he later married Emma Shiels nee Taylor. He fathered 12 children.

What do we know about Catherine? Actually very little. We do know that John Prendergast Jnr. was recorded as BC –Born in the Colony. This proves that Catherine was living on Australian soil at the time she gave birth to Baby John. Did she arrive as a free settler on board the Minerva? We know that no rebel worth his salt would have willingly left behind his wife and family following the 1798 Rebellion because they would have received retribution of the most vicious kind.

In the book that John Washington price, the Ship’s surgeon penned, “The  Minerva Journal”, he states that there were 4 unnamed passengers. Could Catherine have been one of these passengers? And if so, why is she not named?

There is a female (unnamed) listed on the 1802 Muster  at John Prendergast’s property. Again why no name? For that matter, how could John Prendergast, as a Convict have another convict Jane Williams assigned to him as his Governess and Housekeeper – after all, only free settlers were afforded this privilege? Did Catherine hand-pick Jane to take care of Baby John and to be housekeeper to John Prendergast Senior knowing she had to return to Ireland to take care of their other children?

If John Prendergast (Senior) followed the Irish custom of naming his first born son after his own father, then by rights Baby John should actually have been named Patrick after John snr’s father who was also baptised in Dublin at St. Nicholas of Myra church.

I have also found the marriage and death record of a Patrick Prendergast born in Dublin 1797.Could this child be the son born to Catherine and John Prendergast prior to John’s third arrest and subsequent transportation to Australia?

A Librarian in Wexford believes that John Prendergast may have been married to Catherine Fitzgerald. Brian Cleary, a Historian from Wexford linked the Prendergast family and Fitzgerald family with several recorded business transactions. The Fitzgerald family was a very influential family in Ireland-in the 1700s. Lord Edward Fitzgerald who was a leader and died as a consequence of the 1798 Rebellion. He was also the brother of the Duke – the highest aristocracy in Ireland.

In the biography of John Prendergast’s wife,Veronica C.E.O’Brien Sitton states that John Prendergast came from one of the  distinguished Norman-Irish families of Ireland. We know that John Prendergast was a descendant of Maurice and Philip de Prendergast. These Knights came from Wales with Strongbow in 1169 to help the King of Leinster, Diarmuid MacMurrough  to regain Leinster. They were rewarded with land and built Enniscorthy Castle amongst other Castles in Ireland.

Another question that a number of Genealogists have asked is, if John never received his Ticket of Freedom, could he have received Land Grants? We have proof that he did receive Land Grants on a number of occasions. This would not have been possible if he was still a convict.

Could land have been bought in Catherine’s name? Could grants have been received in his sons names? Recently I have noticed that a number of former convicts have purchased land or applied for grants in their children’s names. I noticed that John had written a memorial on behalf of his son Thomas.

Because Catherine vanishes from the Australian records following John Prendergast jnr’s birth in 1800, I have made extensive enquiries as to where Catherine Prendergast might be buried in Australia. I checked the records for Sydney’s first official cemetery dating back to the 1790s. It was known as the “George Street Burial ground”, the “Cathedral close Cemetery” and, retrospectively, the “Town Hall Cemetery”. It was used for 27 years. It is situated where Sydney Town Hall now sits in George Street Sydney.

By 1820 the cemetery had reached capacity so an alternative site was chosen. It was named Brickfield Hill. The human remains from the Town Hall were re-interred here but later, when the need to establish a new Cemetery due to the decision to build Central Railway on the location of Brickfield Hill was made, the bodies were once again exhumed and re-interred at Rookwood Necropolis in 1869.

I have made contact with all these Repositories who hold records for these Cemeteries but there is no listing of our Catherine Prendergast.

Knowing how strong the Prendergast Catholic faith is, I believe that John Prendergast would not have laid Catherine to rest in unhallowed ground and there would be a record of her Catholic burial if she died in Australia. I am aware that the Catholic Religion was banned from 1804 until 1814 due to the continued battle of Vinegar Hill staged at Castle Hill in Sydney’s Outer Western Suburbs.The records for Catherine cease in 1801 well before the ban in 1804 began.

When I visited Glasnevin Cemetery in Dublin in July 2015, Lynn Brady,  the archivist felt sure that it is my Catherine who is buried in K64. As she explained, the address on the Cemetery Record of Catherine along with her Prendergast family and servants  is in the Francis Street Parish which is the right area of Dublin. They lived in a Mansion house in Peter’s Row which is now a backpackers Hostel. Catherine died in the June of 1833 and John Prendergast died in January 1833.

I have discovered two Wills, one number apart. They were both made in Dublin. One for a J. Prendergast and the other, a Catherine Prendergast. Grant dated for both 1833. As they are recorded one number apart, it sounds as if they made their Wills together and on the same day. Is this our John and is this his Catherine?.

Also, the records all show that John Prendergast Snr. died in Australia Intestate. He had distributed most of his property prior to his death. William Prendergast, the youngest child still living at home inherited that property. In 1839 John Prendergast jnr. Bought a large quantity of land in several regions. Was this due to an inheritance from Ireland?.

Back to top of page

2 thoughts on “Catherine Prendergast – Where are you ?”